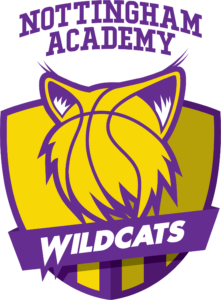 The Nottingham Wildcats is a Professional Basketball Club that has been in existence for 40 Years. Based at the Nottingham Wildcats Arena, it is the home of Basketball to nearly 100 boys and girls from the age of 5 all the way through to seniors. It is a place where people can come to enjoy basketball on a social level but also provides a framework for players who want to take basketball more seriously and succeed at the elite level. It also boasts the most successful professional women’s team in the country since the inception of the Women’s British Basketball League.

Participate is the entry point for your child into the Nottingham Academy Wildcats provision. It is where your child learns to love the game and have fun playing with their friends. Participate begins in Year 7 and is the predominant programme for children in Year 7 and 8. However, there is a Participate option for players all the way through the Academy, until Year 11.

In the Participate Programme, practice sessions happen at lunchtime and are 30-40 minutes long.

Games are played between other city schools.

Coach Kieran Wright leads the Participate Programme, Kieran has an abundance of experience coaching young players while he is also a qualified teacher. Still a basketball player himself, Kieran represents the Nottingham Hoods Men’s Club in NBL Division 1 and has also had stints playing overseas.

The idea of the development training is to enhance the technical, tactical and physical skills of each player who is chosen to attend. Training consists of three after school sessions of one hour and a half.

Games are played between other city schools but there are also opportunities to play national fixtures.

Develop typically begins in Years 9,10 and 11. However, sometimes there are stand-out players who can be identified and invited as young as Year 7.

Director of the Academy Wildcats, Siobhán Prior, leads the Develop Programme. Siobhan is also a GB and England senior women’s player having recently represented Team England at the 2018 Commonwealth Games in Australia where she won a silver medal with the team.

Perform is the most intensive programme in the Nottingham Academy Wildcats. It is a full time basketball programme that runs alongside the Student’s academic programme of either B-Tech or A-Levels.

The Perform programme provides 10 hours of provision a week for each Student Athlete.

This provision consists of:

Coach Kenrick Liburd leads the Perform Programme, Kenrick is vastly experienced having coached professional Basketball  for several years. He has worked in the USA for the majority of his career, but has been back in the UK for four years. He is the current Great Britain Under 16 Women’s Coach and it is his first year coaching the Nottingham Wildcats Women’s Club in their professional league, the WBBL (Women’s British Basketball League).